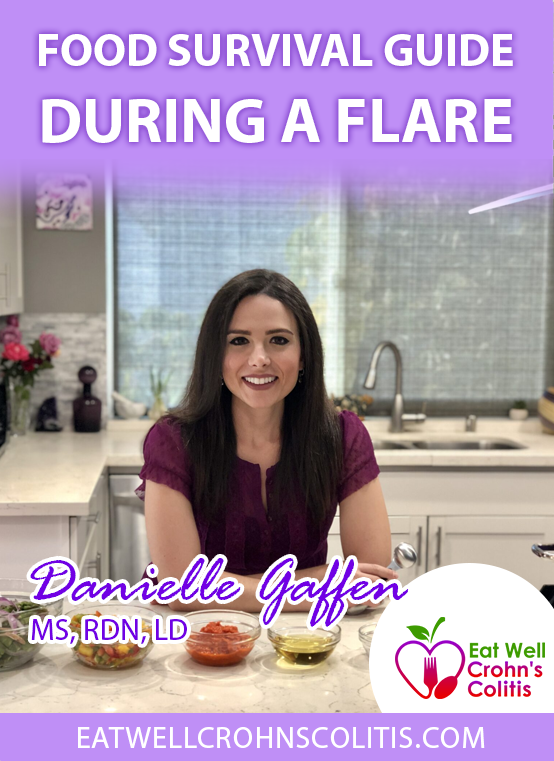 Fast Facts about the Study

This study was a clinical trial that evaluated the Crohn’s Disease Exclusion Diet (CD-Exclusion Diet) for adults with Crohn’s disease.

For 24 weeks, half of the participants in this study received the CD Exclusion Diet alone, while the other half received both the CD-Exclusion Diet and a liquid nutritional formula.

At week 6, clinical remission was achieved by:

Out of the participants above who were in remission at week 6, 80% sustained remission through the end of the study.

35% of total participants were in endoscopic remission at the end of the study.

The CD-Exclusion Diet, with or without a partial liquid nutritional formula, was effective for induction and maintenance of remission in adults with mild-to-moderate Crohn’s disease and might lead to endoscopic remission.

More information about the research publication

Research currently suggests that the development of Crohn’s disease involves a combination of environmental and genetic factors that lead to gastrointestinal inflammation and complications. The current goal of medical therapy is to reduce inflammation and bring on the healing of the lining of the digestive tract, which can be achieved by changing the way the immune system cells signal; however, many of the drugs used to manage Crohn’s disease involve suppressing the immune system and have side-effects.

Dietary factors are among the strongest candidates for environmental factors that might drive inflammation. The effect of dietary exposure as an environmental factor is reflected in the high remission rate observed with exclusive enteral nutrition in children with Crohn’s disease.

The CD-Exclusion Diet is a new dietary therapy specifically designed for patients with Crohn’s disease that uses whole food with a liquid nutritional formula to achieve remission and reduce inflammation.

The CD-Exclusion Diet can generally be defined as:

However, no data has been collected for adults.

Participants were eligible to be included in this study if they:

Patients were excluded from the study if they:

Patients were randomly assigned into either:

The CD-Exclusion Diet is divided into three phases:

Patients who were assigned to the CD-Exclusion Diet + partial liquid nutritional formula received:

How Crohn’s disease activity was measured:

Median Harvey– Bradshaw Index scores were not significantly different between groups at any time point.

Among 22 patients with paired colonoscopies at baseline and week 24, median SES-CD score decreased by 5·0 points.

The researchers asserted that dietary therapy might be ideal for patients with milder disease or as a bridge to medical therapy if there is a delay in instituting medical therapy, and might address the involvement of diet as a trigger of inflammation.

In this pilot study, the researchers demonstrated that dietary therapy (CD-Exclusion Diet with or without a partial liquid nutritional formula) seemed to be effective for induction and maintenance of remission in a group of adults with mild-to-moderate Crohn’s disease:

Therefore, the researchers were unable to extend the application of the results of this study to patients who receive anti-TNF drugs or those with more severe disease.

Since this was a pilot study, the researchers did not include a control group, as it would have been unethical to treat patients with active disease with a placebo intervention for 6 months.

In summary, this study is the first prospective investigation of using only dietary therapy in adults with active Crohn’s disease, designed and performed using rigorous criteria and an evaluation of mucosal healing, with the aim of meeting the current goals of therapy in Crohn’s disease.

Although this was only a pilot trial, these findings suggest that the Crohn’s Disease Exclusion Diet could be used in adults with uncomplicated mild-to-moderate Crohn’s disease at diagnosis and possibly serve as a therapeutic alternative for patients who cannot receive medical therapy due to underlying health conditions.

Want to chat about nutrition for your Crohn’s disease?

Understanding the link between nutrition and gut disease prompted me to obtain my master’s degree in Nutritional Sciences at San Diego State University and become an IBD Registered Dietitian Nutritionist. Now I work with people who have Crohn’s and colitis who are struggling with confusion around what to eat. My favorite part is helping them to build confidence to eat without fear while managing their symptoms.
PrevPreviousIBS and IBD: What’s the Difference?
NextIBD and the Gut Microbiome: What We Know So FarNext